Visit the EPRI Environment & Renewables Research Portfolio webpage for a description of other current research.

EPRI and project collaborators hosted a roundtable discussion in November 2015 with representatives from the investment community in New York City. The meeting presented the example of quantified water quality credits from the Ohio River Basin Water Quality Trading Project and through a facilitated discussion, identify any missing elements to unleash the market for impact investors. Technical complexity, assurance of buyers, and risk of erodible demand from regulatory change were themes noted from the discussion. Read More

EPRI officially transferred the first voluntary, verified, and quantified stewardship credits for water nutrients in the United States on March 11, 2014. As stewardship credits, they cannot be applied toward permit compliance obligations and represent 100% uplift in watershed protection.  These were the first transactions in the project and will serve as a foundation for ongoing discussions regarding the use of water quality trading to meet permit compliance obligations.

EPRI executed a series of pilot trades in March of 2014 to test the project, representing the first interstate credit transactions for water nutrients in the United States. Duke Energy, Hoosier Energy, and American Electric Power became the first buyers in the program. Collectively, the companies purchased 9000 stewardship credits, agreeing to retire the associated nutrient and ecosystem benefits rather than apply them towards possible future permit requirements.

In 2015, an additional 229 credits were sold to the University of Connecticut. Professor Stephen Swallow and graduate students are conducting environmental economics research which has demonstrated that ecosystem service co-benefits increase the value individuals would be willing to pay for credits by about 34%. These co-benefits include creating wildlife and pollinator habitat, enhancing farm livestock welfare, and carbon sequestration. 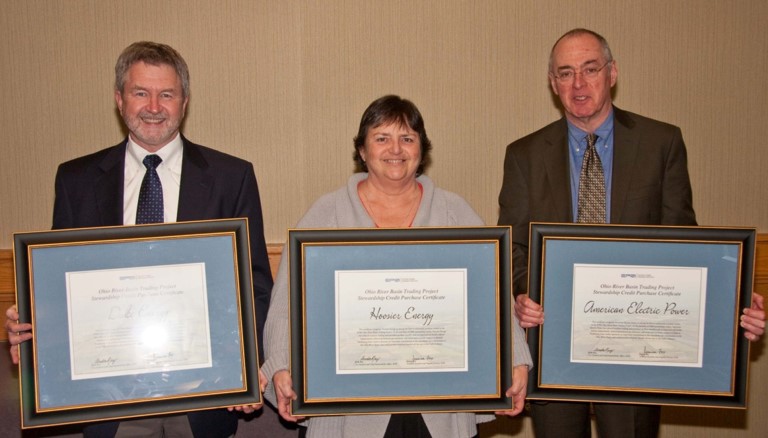 At full scale, this innovative project could become the world's largest WQT program. It will be a large, innovative program possibly moving millions of private dollars into the farm economy to pay farmers for reducing nutrient loading. Utilizing solid scientific foundations, this project could result in a multi-industry market that will accelerate cost-effective water quality improvements and provide important ancillary ecological benefits. Following years of establishing strong project foundations, the project team executed pilot trades for stewardship credits in 2014 and for a research project in 2015. A recent amendment to the plan extended the pilot period through 2020.

If 5% of the 230,000 farmers in the ORB actively trade, it could result in new conservation practices to reduce nutrient run-off on as many as 2.2 million acres. However, prior attempts by other projects to develop thriving WQT markets involving agriculture failed because they did not engage farmers early enough in the design of the program. To lay the groundwork for a sustainable market, our collaborators have worked under an EPA Targeted Watershed Grant talking with over 230 farmers and conservation professionals around the basin to secure buy-in and identify the critical elements that ensure their participation.

Through these meetings, we have learned that farmers and conservation professionals are generally supportive of the concept of WQT and receptive to selling credits. They viewed the program as another source of funding to implement conservation practices. Although selling nutrient credits as a commodity is a new concept for agriculture, farmers understand commodity markets. However, to secure their participation in a WQT market they wanted a minimum of paperwork with simple contracts; mechanisms to avoid swings in credit prices; options for dealing with non-performance; access to technical assistance; information about how credited Best Management Practices (BMP) will affect crop yields; synergy with existing cost-share programs; use of trusted intermediaries (to aggregate credits, monitor and verify credited BMPs); and consistent and transparent rules . By following the direct advice of farmers, project collaborators are confident that the interstate trading framework that emerges from these pilot trades will work for both buyers and sellers and be a model of other areas of the country. Download EPRI Technical Update: Barriers and Solutions for Farmer Participation in the Ohio River Water Quality Trading Project.

More information on farmer engagement can be found on the Agriculture Advisory Committee.

To ensure a strong scientific base, the Project is using two watershed models for estimating nutrient reductions from the point of generation (credit seller) to the point of use (credit buyer). The Project is currently using: (1) the EPA Region 5 spreadsheet model for estimating nutrient reductions at the edge of the field (i.e., Point of Generation Credits); and (2) the Watershed Analysis Risk Management Framework (WARMF) model for estimating nutrient attenuation (reduction) from the edge-of-field to the point of use (i.e., Point of Use Credits). With these models, the Project is using a scientifically-based credit equation methodology that will account for location-specific nutrient attenuation factors, rather than a blanket trading ratio throughout the entire Ohio River Basin.

More information on the WARMF model can be found on the Watershed Modeling Page.

A series of transactions was implemented to establish water quality credits during the pilot phase of the Project. In 2013, EPRI entered into agreements with three state agencies (Ohio Department of Natural Resources, Kentucky Division of Conservation, and Indiana State Department of Agriculture) to initiate the downstream flow of funding. Each state was contracted to receive funds and entered into agreements with the state soil and water conservation districts ("SWCDs") to move the money to landowners. Between 2013 and 2016, EPRI released a funding opportunity in select counties in Indiana (Ripley, Switzerland, Ohio, Dearborn and Wayne counties), Ohio (Columbiana, Jefferson, Mahoning and Morgan counties), and Kentucky (Bracken, Boone and Mason counties) for farmers to apply for funding. Funding moved from EPRI to the respective agricultural state agency, to the local SWCD, and finally to the farmer. These projects resulted in 5-10 year BMP commitments from landowners in the three states, which generated more than 100,000 pounds of TN and TP reductions. BMPs included (1) cover crops, (2) nutrient management, (3) vegetative filter strips, (4) grass waterways, (5) livestock exclusion, (6) heavy use protection areas, (7) conservation tillage and/or (8) tree planting.

In 2016, a second funding notice was released which added forest planting as a targeted BMP. In 2018, EPRI released a third funding notice that will run through 2019 to fund additional forestry-focused projects.

EPRI continues to work collaboratively with the state agencies to ensure the robust implementation of the program. We have begun contracting directly with SWCDs and landowners, rather than via the state agriculture agencies, when it makes sense for all parties involved.

EPRI will own all of the credits that are established through these transactions. As a 501(c)3 nonprofit organization, EPRI intends to make credits broadly available. The credit generation and transaction process is summarized in the figure below. More details are presented in the Pilot Trading Plan. 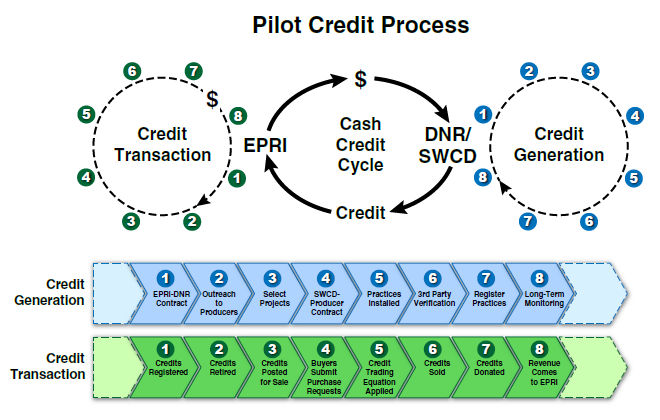 The Project was designed to test the necessary elements for an interstate trading program in the Ohio River Basin. The project anticipates trades with power plants or other potential participants involving up to 30 farms to implement conservation practices on up to 20,000 acres. Nutrient reductions are expected to range up to 66,000 lbs of total nitrogen and 22,000 lbs of phosphorus reductions over a five-year period. Pilot trades will resolve technical issues such as credit baselines, credit calculation methods, practice verification and certification, application of the watershed model, local and regional program administrative needs, credit tracking, contracting and outreach. This information will help inform technical guidelines for science-based approaches to measure environmental benefits from agricultural conservation and land management activities. In addition, the project will explore opportunities to generate greenhouse gas (GHG) emission reduction credits to enhance farmer income, incentivize greater conservation practice implementation and benefit buyers that need nutrient and GHG emissions offsets, resulting in greater public benefit. All of the learning from this project is transferable to other ecosystem service and environmental market efforts across the country. In addition, the project's tested approach may be a replicable model for other regional water quality trading programs. 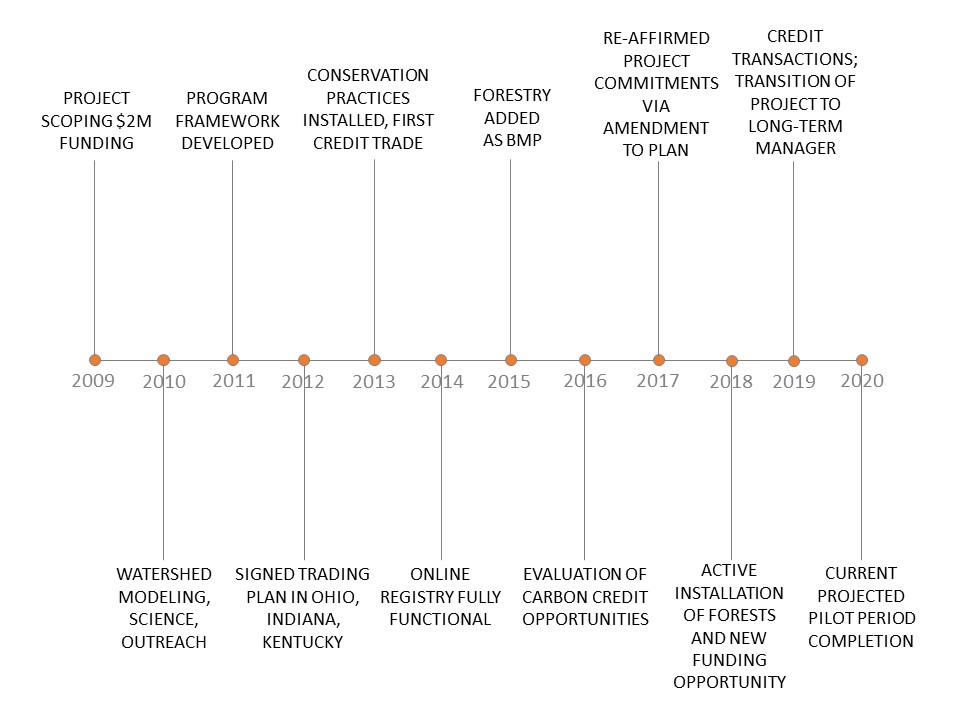